Navigating Life With a Neurological Disorder

If you like to color and if you want to experience calmness and a sense of well-being, this coloring book is the perfect coloring book for you. While the graphics range from the abstract to whimsy, they are carefully crafted to shift negative thoughts and feelings. Modeled after cognitive behavior therapy, these pictures reinforce that we are safe, we are not alone, and we are worthy of a life of joy.

Quiet Coloring  is a wonderful meditative art book that will help you stop the internal noise and find a place of comfort in the world within you.

You are safe. You are Not alone.

things will get better. 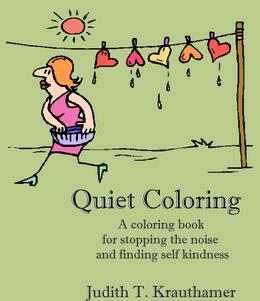 In 2013 I wrote the book "Sound-Rage. A primer of the neurobiology and psychology of a little known anger disorder." It was the first book on misophonia, and it was written after a year of research and interviews. In that book, I theorized that the brain of the person with misophonia is neuro-atypical. In other words, the disorder is not a learned or conditioned response. There is a neurological basis for the brain responding in ways that the average brain does not.

At that time, the idea that misophonia was a genuine neurological disorder like tourette, and had neurobiological attributes like Obsessive Compulsive Disorder (OCD), was controversial.  In fact, many people (myself included) were frustrated that there were practitioners who believed the response to triggers was learned, and could be unlearned. Psychiatrists wrongly misdiagnosed misophonia as a form of OCD. The idea that misophonia was learned contributed to stigma; people with the disorder worried that they were considered mentally ill.

Finally, in 2017, a study conducted in England using Functional magnetic resonance imaging (a procedure that measures brain activity) validated that misophonia is associated with abnormal activation, functional connectivity, and structural changes in the brain and heightened autonomic responses of the body. To access the article click here.

What does this mean? It means that people with misophonia, like people with OCD, attention deficit disorder (ADD), oppositional defiance disorder (ODD), Tourette, generalized anxiety, and a host of other disorders, have neuro-atypical brains. We are in good company. Roughly 20%, or one out of five people, are neuro-atypical. Not better or worse. Simply different. We have to develop strategies for getting through life while experiencing heightened anxieties. We have to find ways to experience life to its fullest while minimizing the impact of triggers on our lives.

We are all worthy of a life of joy. We are all capable of a life of joy. Having misophonia does not change that. All it means is that our challenges are different from other people. Nothing more, nothing less.We are safe. We are not alone. Things can, and will, get better.