Navigating Life With a Neurological Disorder

The estimated range of age-of-onset tends to be between the ages of 8 and 13, or late childhood through mid-adolescence. Having a discrete age of onset range signifies that there is a developmental component to the disorder. Given the prevalence of the age of onset prior to puberty, the disorder could be considered a developmental childhood disorder.

Trigger expansion is a key component of this disorder. It expands in sensory modality, from sound to sight to smell, creating a multitude of daily onslaughts that are virtually impossible to avoid. For almost all sufferers, the number and type of triggers increase through time. This is due to the nature of sensory processing: there is great overlap in the sensory cortices of the brain. The signals from a trigger from one sensory modality (such as a chewing sound) get neurologically associated with signals from another trigger (such as the sight of a person chewing) in a non-conscious, non-learned process.

Sufferers across the board engage in hypervigilant attention to sources, situations, and environments where triggers might occur. Hypervigilance can begin as a cognitive process in which an individual concerned about particular threats closely monitors environmental conditions.   This acute attention can alter the sensitivity of the brain to trigger stimuli. And through these changes in sensitivity, the brain is primed to take in, modify, and expand triggers.

Critically, it is the emotional response of anger without overt acts of aggression that distinguishes this syndrome from fear-based anxiety disorders.  Although the prevalent emotional reaction is anger, other elicited emotions are upset, sadness, disgust, fear, anxiety, and an overwhelming need to cry. Along with emotional responses are cognitive (thought) reactions to triggers. Cognition refers to information processing, utilizing mental processes of attention, memory, problem solving, making judgments, and decision making.  A sufferer may feel (think) intense hatred toward the origin of the trigger (the source). A cognitive judgment that might arise would be “That person is a slob. People who chew gum are like cows chewing cud.” Consistently across testimonies, as story tellers recount their experiences, it is their thoughts about the people creating the triggers, and not the triggers themselves — that illicit negative value judgments. More often than not, the sufferer believes that the person making the noise is purposely and consciously causing discomfort.

One theory [the fundamental premise of the book Sound-Rage] is that the anger response is generated from the brain interpreting the signals  as  the  valenced  unpleasantness  of pain.  It is theorized that the triggers cause affective, non-sensational pain, and it is pain that makes the brain recognize and assess triggers as dangerous and threatening.

The theory of affective, non-sensation pain is supported by another theory, one that suggests the possibility of a pain network that operates in the total absence of noxious stimulation. This network, comprising emotional and cognitive inputs from higher neural centers, can expand, amplify, and even create pain symptoms.  A mental, rather than physical, experience of pain can originate exclusively within a subject’s brain rather than being necessarily dependent on the pathology of peripheral tissue. The body’s broad response to pain includes emotional, neuroendocrine, arousal, autonomic, and somatosensory components. The affective dimension of pain is related to the unpleasantness of the stimulus; it is what neuroscientists refer to as the “suffering from pain. 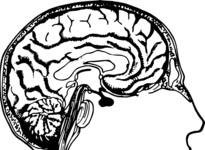